In Part 1 of our MWC18 coverage, we featured info from the Mobile IoT Summit, and VDC’s pick for our Embeddy Award from the show.
In Part 2, we highlight a selection of notable vendors on the trade show floor, as seen by VDC’s Roy Murdock and Steve Hoffenberg.

Allot, which has had established business in deep packet inspection (DPI) for enterprise customers, briefed analysts on its newer range of security services for ISP and telecom providers to offer to their consumers, including home network security monitoring, a phone app partnership with McAfee, a home router security agent (from its January 2018 acquisition of Netonomy), IoT anomaly detection and filtering, and DDoS detection and prevention.

Arm showed off its latest automotive technology in partnership with Audi, bringing an Audi A8 to the show floor. Arm processors were running in systems ranging from the powertrain to the in-vehicle infotainment systems. The Audi A8 is the first level 3 autonomous production vehicle and is set to be released in Fall 2018. 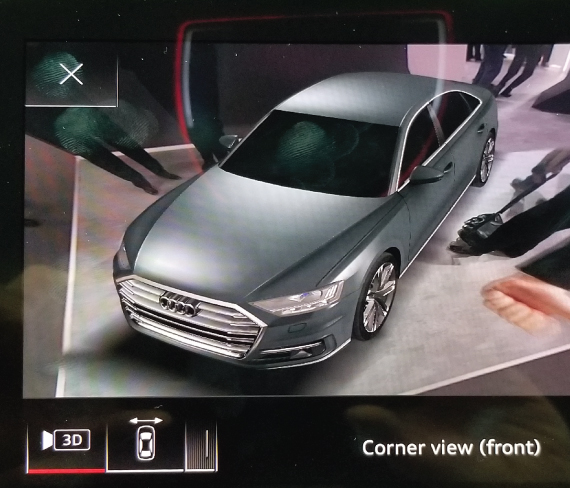 Out-of-Body-Experience: Audi A8’s real time exterior view shown on its own internal dashboard, manipulated from image data from the cameras on the vehicle itself

Canonical shared insights into why they scaled back their physical presence at MWC – “retire while you’re ahead” – many of the booths at the show were already running Ubuntu or Canonical software in one form or another. The company instead presented with a booth at Embedded World in Germany to further cement its ties in the embedded and IoT community. We expect to see robotics and computer vision as important growth markets for the company going forward as it continues to grow its Snaps application packaging and marketplace framework out from gateway and edge devices.

Cumulocity is undergoing rapid transformation after its acquisition by Software AG, forming an integral part of the new IoT business unit established within Software AG as of January 1 2018. The team is hard at work integrating Apama, Mashzone, and Zementis analytics capabilities into the IoT PaaS. Software AG has also set to bring in a new CEO Sanjay Brahmawar from IBM’s Watson IoT division, signaling further the direction the company is set to take with its current portfolio.

ENEA exhibited its new security and edge networking solutions with partners Lanner Electronics and Trend Micro. Enea’s Linux and OSE RTOS offerings will be integral parts of its offering as it extends further up the networking software stack into security, analytics, and 5G infrastructure.

Ericsson had the single largest presence of any vendor at MWC. Calling it a “booth” wouldn’t do it justice, as it took up a sizable chunk of one of the exhibit halls, essentially creating a show-within-a-show. It featured numerous wireless technologies and use cases, many of which were IoT-related, including manufacturing systems, security solutions, and the “IoT Accelerator” end-to-end stack for software and cloud services.

Giesecke+Devrient featured a variety of its cybersecurity technologies applied to IoT use cases. One interested demo showcased a project in conjunction with BWM and T-Mobile to enable secure vehicle access via smartphone, for role-based access (e.g. mechanic vs. family member) and car sharing services.

Harman (Samsung) is forging ahead with its Ignite automotive services platform, announcing a partnership with PTC to develop AR and mixed reality platforms for enterprises and Harman’s Media Suite. The company also announced a strengthened partnership with the Samsung ARTIK team, bringing Harman gateways to market in combination with Artik boards for manufacturing, healthcare, and smart infrastructure applications. The crossover between the two companies continues to grow in scale as Harman’s vertical domain focus in automotive blends well with Samsung’s horizontal technology focus.

SAP launched its SAP Leonardo Industry Accelerator Package for Telecommunications Companies (fitting for MWC), adding to its portfolio of accelerator packages for retail, consumer products, chemicals, utilities, and others. The company also announced the addition of customers and partners to its mobility services marketplace, SAP Vehicles Network, drawing attention to its growing strength in the automotive sector.

Salesforce shared updates on its “Internet of Customers” journey, showing us an example of a fitness machine monitoring solution they had prototyped and wired up with potential customers in the meeting before ours. Salesforce remains focused mainly on supporting customers in the backend ERP/CRM cloud market, but is making it easy for OEMs and IoT “thing” makers to connect and analyze their data with Salesforce.

Telefónica held an industry analyst briefing, featuring five of its top executives presenting and discussing the company’s IoT strategy, technology, and business. This leading wireless provider, with services in 21 countries, will support both NB-IoT (“best for things that don’t move”) and LTE-M (“best for things that move or may need voice for emergency”), with device and data protection from its ElevenPaths security group.

View the 2018 IoT & Embedded Technology Research Outline to learn more about our coverage.