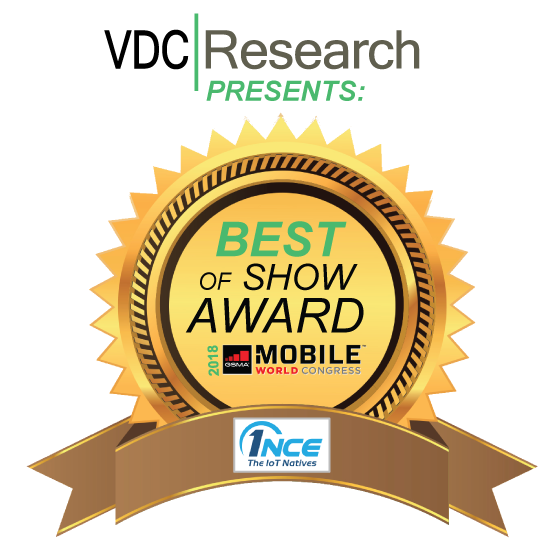 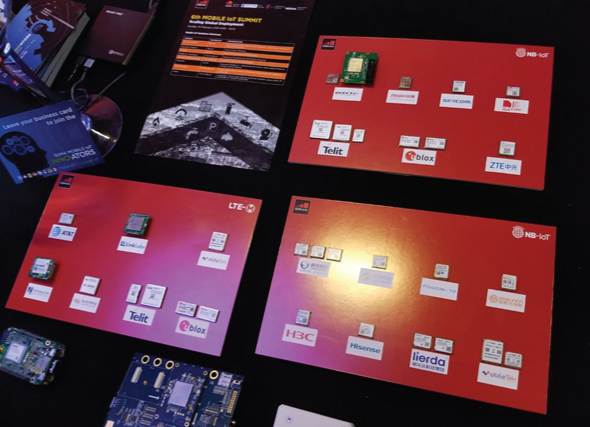 Graham Trickey, Head of IoT for the GSMA (the industry association behind MWC), noted that as of February 2018, there were 41 commercially launched mobile IoT (licensed spectrum) networks worldwide, and Cheng Zhu, President of Huawei’s Cellular IoT Product Line, said he expected 100 such networks to be operational by the end of the year, serving 150 million connected devices (primarily in China).

VDC’s Embeddy Award
At the main MWC exhibits in the halls of Fira Gran Via, IoT was in evidence across the show floors. But one modestly sized booth in particular caught our attention, that of startup 1NCE (pronounced “once”), which announced its licensed spectrum communications service for the flat rate of 10 euros for 10 years, in other words, the equivalent of 1 euro per year (about $1.23 as of MWC). 1NCE is backed financially and technically by Deutsche Telekom, the largest telecommunications provider (by revenue) in Europe. 1NCE will utilize NB-IoT (narrowband) technology, and will also support legacy 2G and 3G technology.

Of course there’s more to the story (described below), but suffice to say that VDC has chosen 1NCE as the recipient of our Embeddy Award for “Best of Show” at MWC. This award does not imply that 1NCE was the best IoT product or service on offer, but rather that it was the most notable and had the potential to have the greatest market impact. (VDC bestowed additional Embeddy awards for IoT hardware and software at the Embedded World show in Nuremberg, which coincided with the dates of MWC.)

Back in January of 2017, VDC published a report entitled, LPWANs and 5G Technologies for IoT Communications. At that time, no NB-IoT modules were yet on the market, the first LTE-M modules had just begun to ship, and the first commercial LTE-M service (from Verizon in the USA) had only launched in mid-December 2016. As initial NB-IoT services rolled out in 2017, their prices were on the order of $10 or more per year per device. Now, 1NCE’s pricing threatens to force every licensed spectrum IoT service provider to recalibrate their expectations for revenue per device.

1NCE openly declares its own pricing as disruptive. Of course, many tech companies routinely describe themselves as disruptive, so the term has become hackneyed, but typically such usage is by companies that consider their technology—not their pricing—to be disruptive. In the case of 1NCE, we have to agree with the disruptive descriptor. 1NCE sets a new bar to which customers of other licensed spectrum IoT services will point, expecting similar pricing. And other operators will face challenges justifying significantly higher prices for similar services.

The praise we’re heaping on 1NCE comes with several caveats, however: