At this year’s Mobile World Congress in Barcelona, IoT products and services were less prominent than in recent years, as the spotlights this time shone primarily on 5G networks, and to a lesser extent on Microsoft’s second generation Hololens glasses for augmented reality. Nevertheless, IoT was ever-present, blending in like an accepted member of the wireless family. No single IoT service stood out dramatically, but VDC was especially impressed by the collective lineup of IoT-related services on display from Telefónica.

Madrid-based Telefónica is one of the world’s largest providers of telecommunication services, with significant presences in Spain (under the Movistar brand), as well as in Germany and the UK (both via its 2006 acquisition of O2), France (via a joint venture with Bouygues Telecom), and many countries in Central and South America.

Since last year’s MWC, notable IoT-related activities by Telefónica include:

At MWC19, Telefónica touted numerous additional projects and partnerships, including:

For these and other related activities, VDC is pleased to award Telefónica our Embeddy Award for “Best of Show” for IoT services. Congratulations to Telefónica. 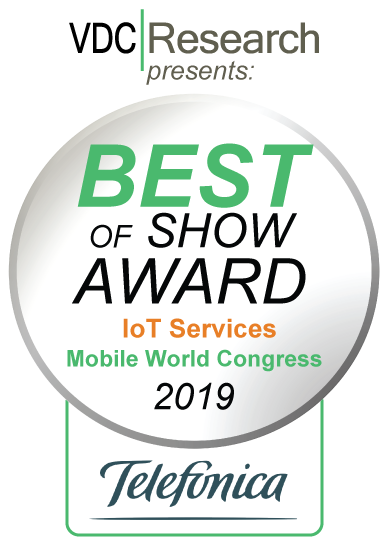