In part 2 of our ARM TechCon recap (See Part 1 here), we will see how new embedded development solutions for system-on-chips and connectivity are lowering the hurdles for OEMs and engineers. We will also illustrate the importance of the automotive (IoT) market looking forward.

As Embedded Processors Become Platforms of Integration, Engineering Focus Turns Towards Simplifying Development
System-on-chips have become extremely complex given the increasing number of integrations at play between hardware/cores and software stack elements. Fueling this complexity is the growth in subsystem IP and security requirements which further challenges development schedules and the potential for optimization. Fortunately for developers, organizations like UltraSoC have been quickly growing to facilitate SoC debugging and provide more systems-level monitoring and analytics. The company’s UltraDebug solution can use standard debug ports but also allows a single high-speed chip interface such as USB to be used simultaneously for communications and debugging. At this year’s ARM TechCon, UltraSoC extended its family of protocol-aware monitors with the launch of the ARM AMBA-5 CHI Monitor.

Decoupling Connectivity from Hardware will Accelerate IoT Deployments
Enabling embedded connectivity or selecting an IoT protocol for a product that will be deployed in the field for the next several years can be a daunting experience for OEMs and systems integrators. The biggest concern for most is designing themselves into a corner that which may require dramatic time and resources to get out of in the future (e.g., investing in development using a particular IoT protocol that falls out of favor due to emerging alternatives). At this year’s event, I was fortunate enough to learn more about the solutions offered by Flex Logix and Wirepas. Wirepas is helping provide protocol versatility through decentralizing network management and having devices intelligently manage themselves locally in (multi-hop) mesh networks. Flex Logix is taking another approach by providing reconfigurable RTL blocks on MCUs and SoCs to adapt to different interfaces (among a host of other potential implementations and benefits).

Importance of the Automotive Market
This year’s TechCon featured a keynote speech by Charlie Miller, one of the security researchers behind the infamous Jeep hack that forced Chrysler to recall 1.4 million vehicles. ARM also devoted one of its analyst roundtable discussions to the topic of its developments for the automotive market. And many of the vendors with whom we spoke noted the rising importance of the automotive market in their product strategies. With cellular and Bluetooth connectivity, advanced driver assistance systems (ADAS), forthcoming vehicle-to-vehicle (V2V) and vehicle-to-infrastructure (V2I) communications, autonomous driving on the horizon, and the security challenges involved across-the-board in increasingly electronic automotive systems, the market is primed for continued ramp up of hardware and software technology targeting the automobile. The interest in this vertical market was further exacerbated by the announcement—not at the event, but while it was still underway—of Qualcomm’s impending acquisition of NXP, a company which itself became the leader in automotive semiconductors when it acquired Freescale in December 2015. We wouldn’t be surprised to see automotive demos play a more evident role on the show floor next year.

The Internet of Things is causing unparalleled change in the embedded industry. ARM TechCon 2016 was filled with a sweeping variety of new solutions to ease escalating engineering challenges and meet the demanding system requirements of emerging connected devices. We look forward to watching how these new offerings fare in such a dynamic climate through the next year and seeing what headway the industry makes before we all meet again at next year’s ARM TechCon event.

A few more photos from the event: 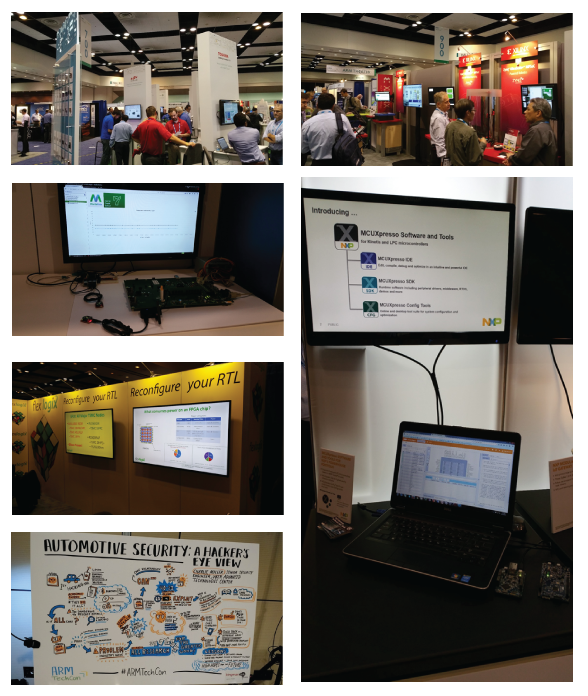