Apple released its long-anticipated AR tracking and recognition SDK, ARKit, at its 2017 Worldwide Developers Conference (WWDC) last Monday. Many in the AR industry had anticipated the release for quite some time, given Apple’s 2015 acquisition of leading AR SDK provider Metaio – a German company incubated within Volkswagen in 2003. Until last week, Apple had remained content to play at the mobile hardware, OS, and application distribution levels, shuttering all licensing of Metaio’s SDK and tracking solutions, along with the popular insideAR conference that Metaio had organized since 2006. In recent years, Apple released a few 2D and 3D engines and frameworks to iOS app developers in the form of SpriteKit and SceneKit, but refrained from offering the simultaneous localization and mapping (SLAM) SDK that Metaio had been working to develop. ARKit features support for a wide range of popular iOS 2D/3D app development options including Unity, Unreal Engine, and SceneKit.

ARKit will allow Apple to compete directly with rival Google Tango, and to challenge the numerous specialized SLAM SDK providers, such as Aurasma, Kudan, Vuforia (PTC), and Wikitude that sell AR tools and development solutions within the market today. It also gives Apple a leg up on Microsoft, which has been focused mainly on the hardware side of AR with its Hololens initiative, with no dedicated AR SDK available to Windows 10 application developers. Figure 1 presents a (non-exhaustive) overview of the current state of the AR market, highlighting Apple’s current solution portfolio. 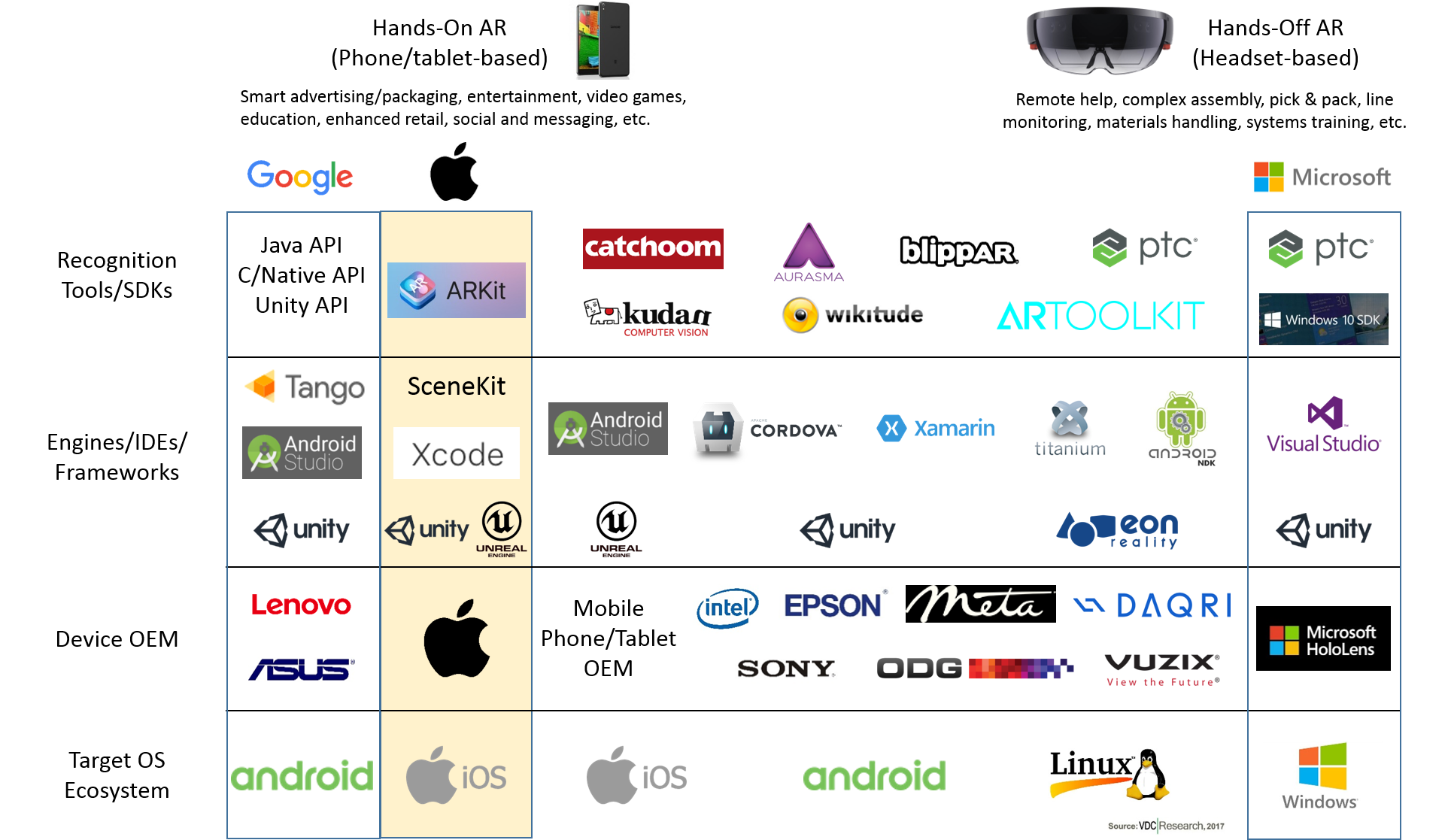 With ARKit, Apple has rounded out a complete application development stack for iPhone and iPad – handheld devices that present a familiar form factor for the current generation of mobile application developers. As we outline in our recent report, The Global Market for Augmented Reality Development Solutions (released prior to Apple’s announcement), the balance of application development will shift towards the richer functionality enabled by wearable devices over the next five years, especially as hands-free industrial and enterprise AR systems begin to take hold in the most forward-thinking factories and sites.

Logically, the next move for Apple would be to release its own line of wearable hardware in order to compete with the growing Windows and Android ecosystems. The company seems to be pushing in this direction with an internal AR division led by Mike Rockwell, a former member of the hardware and new technologies group at Dolby. Other notable AR hires have included engineers previously involved with Amazon Lumberyard, Meta, Oculus, Google Earth, and Hololens. Apple also hired NASA mixed reality expert Jeff Norris in early 2017, the most recent example of the company’s commitment to building out a leading AR team.

View the recent report to gain further quantitative and qualitative insight into the size of the AR opportunity and learn more about the handful of companies that currently lead the AR software development solutions market.