Surprise, Google has Enterprise Aspirations for Chrome—VMware Gets in First

VMware announced it was expanding its partnership with Google this past May to accelerate the adoption of Chromebooks (the announcement was timed for Dell EMC World). The company has now revealed the partnership has expanded since, and that its AirWatch EMM platform has achieved full integration with Google’s Chrome Device Management.

VMware has been partnering with Google for some time now (VMware and Google forged a similar arrangement back in 2014 for Horizon DaaS which did not see much traction with customers.); not only has Google signaled its intent to broaden its footprint in corporate settings, the vendor has aspirations that span well beyond the education market where Chromebooks have been gaining traction. Google’s release of Chrome Enterprise (a new version of Chrome OS designed for a subscription service) is the proof-point.

Google’s effort to bring its ChromeOS into corporate settings makes sense, particularly when considering that the devices can be deployed as modern thin clients. Chromebooks are inexpensive relative to competing products; and now that Google has opened up its management APIs (initially just to AirWatch), VMware customers can now manage their Chrome devices alongside their mobile and Windows 10 deployments from a single console. More importantly, they gain core EMM functions (e.g., the ability to manage auto-updates, configure DLP policies and remotely wipe corporate data) for these devices. Google’s new Chrome Enterprise OS incorporates several important management capabilities that are a must have for IT (e.g., support for Active Directory, the ability to manage/control OS updates, encryption, screen lock, browser, Android apps, and certificate settings—to name just a few); without these, Google’s ability to gain traction in corporate settings would have been severely limited. VMware’s Workspace ONE solution will simplify application accessibility on Chromebooks while offering better lifecycle management tools. The technology partnership also brings the ability for access to Windows applications on Chromebooks (via VMware's Horizon solution).

The UEM Opportunity Looms Large
The opportunity for EMM vendors to reinvent their businesses around the possibilities these new platforms offer will be significant—however, executing on this pivot will be a defining event for the market. Like VMware, other EMM vendors are focused on expanding their platform support capabilities for modern OSes (e.g., Google’s Chrome Enterprise OS, Microsoft’s Windows 10 and Apple’s macOS); however, we expect to see organizations continue to hold on to their legacy Windows OS PCs for years to come. Even though Microsoft officially ended support for Windows XP two years ago, a significant number of these PCs remain in service. While support for Windows 7 is scheduled to end in 2020, it is likely that these devices will also remain in service for at least three to five years beyond that date. This means that the opportunity to offer expansive unified endpoint management (UEM) solutions won’t fully be realized for at least another four to six years. While EMM vendors will be able to cater to certain UEM use cases, they should not expect to see significant uplift from these solutions in the near term. Until the inefficiencies of maintaining separate endpoint management solutions for mobile and PC platforms become painfully apparent, most organizations will hold off on making meaningful investments in UEM. Our data showed that the wide majority (87%) of large enterprise customers expect to reap efficiency gains from the ability to manage both fixed (i.e., PC, servers, etc.) computer platforms and mobile deployments from a single endpoint management platform. Below is VDC’s forecast of the number of devices managed by a UEM solution through 2021. 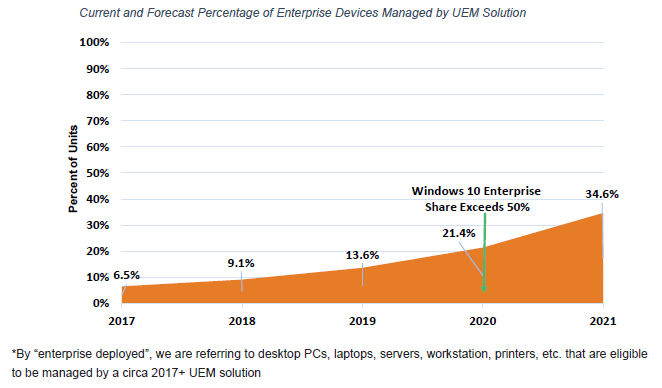 While the exclusivity element of VMware partnership with Google is notable, it definitely is not permanent. We expect to see Google open up its APIs to other EMM vendors once the agreed upon exclusivity period expires. But, given VMware’s EMM footprint (25% of the market), the company is likely to reap near-term benefits from its partnership with Google. AirWatch was already doing well in the education market prior to being acquired by VMware in 2014; VMware has been building on its education footprint and is likely to see new opportunities for Chromebook management as many of its existing customers continue to expand their “non-Windows” deployments.