The capabilities of technologies used by today’s police force are not keeping up with advances of policing operations according to recent research conducted by VDC. Today’s public safety officers are already juggling various technologies as part of their daily workflow, including two-way radios, vehicle-mounted computers, radar guns, recording devices, mobile phones etc. While part of the problem is certainly better management of this increasing volume of IT assets and ensuring they do not become a distraction, another critical hurdle is overcoming the limitations of today’s public safety networks and their slow speeds and frequent coverage issues. From an operational perspective, the greatest challenges facing public safety organizations today are reduction of response times and the lack of real time information in the field.  Considering both technical and operational headwinds, it is difficult to ignore how they influence one another.

Fundamentally, the lack of a reliable and secure broadband network for public safety is what is keeping many organizations from addressing their operational priorities. The bandwidth of a network is crucial in allowing the technology to perform at its optimal level, and when lacking, can seriously hinder an officer’s performance in the field. Reliability is also an imperative factor to enabling success in the police force; lack of reliable connectivity and network interference were frequent mentions as key challenges in VDC’s research. The strategic goals for many of the organizations surveyed by VDC spanned improving overall situational awareness and police collaboration, enhancing officer safety and finally, increasing the efficiency and effectiveness of crime prevention.

In an effort to combat many of these struggles, the First Responder Network Authority was created. Officially recognized under the Middle Class Tax Relief and Job Creation Act of 2012, FirstNet was designed to establish and maintain an interoperable public safety broadband network. The idea behind FirstNet is to provide a secure network that will streamline communication and connection between different public safety agencies, avoiding the errors and challenges of cross-channel communication during natural disasters and terrorist attacks. In March 2017, FirstNet awarded the contract to AT&T to build and develop the network, while allowing each state the opportunity to opt out, and propose a development plan for their own, state-built network that operates in tandem with what AT&T will provide. As of June 2017, Alabama, Arizona, Colorado, Michigan, Massachusetts, New Hampshire and Wisconsin have all issued requests to opt-out. Over the next 90 days, states will propose their individual network plans to the FCC (Federal Communications Commission) for approval. States that have opted-in include Virginia, Arkansas, Wyoming, Kentucky, Michigan (withdrew their RFP for opt-out), New Mexico and territory U.S Virgin Islands. 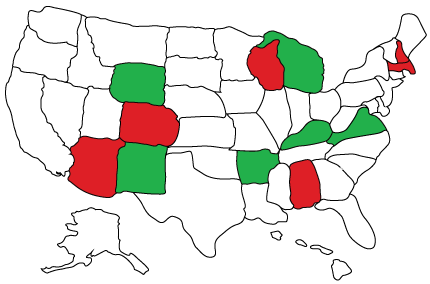 Now that AT&T has secured the contract for FirstNet, they have a fairly aggressive plan to begin building out the necessary infrastructure. Nevertheless, given the size and complexity of the initiative, it will take time to realize. As such, there remains a healthy amount of skepticism among public safety organizations regarding the ultimate impact of FirstNet, which is confirmed in VDC’s research. While investment in Band14 compliant devices rated second on a list of highest rated solutions to be implemented over the next 2-5 years (behind NG911), only 32% of respondents “completely agreed” or “agreed” that FirstNet will have a major impact on policing. As FirstNet continues to develop and states continue to submit their RFP’s, the landscape of technology in policing may begin to change, and hopefully, it will see an improvement.