In Q1, the total worldwide rugged mobile hardware market, sized as all rugged notebooks, tablets, vehicle mounted devices, and handhelds, grossed nearly $913 million in revenue shipments and had over 975,000 units ship. As seen in Figure 1, the Q1 rugged market saw an overall year-over-year (YoY) revenue dip of -6.3% when compared with Q1 2015. 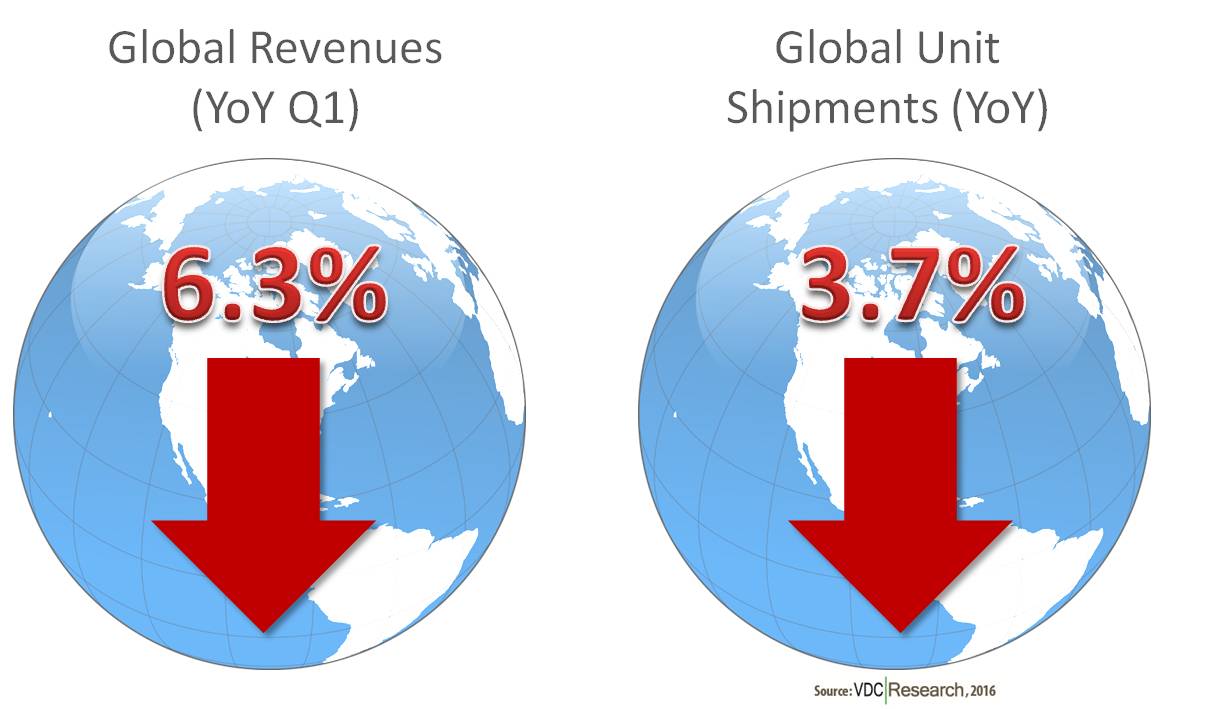 The market continued to struggle in Q1, with overall YoY revenues contracting to sub-$1 billion levels. Looking at this YoY comparison, there was weakened global revenue shipments for rugged tablets, handheld/PDA computing devices, and forklift mounted computers. In contrast, the rugged notebook market experienced its first YoY growth since 2014, increasing revenues by nearly 14.3% over Q1 2015.

Breaking Q1 2016 down by region and form factor, we notice the Americas region experienced significant revenue losses in the handheld device space over Q1 2015. These losses are primarily due to large Q1 2015 contracts and subsequent deployments. As such, when one compares Q1 YoY there is a significant gap which would naturally cause seemingly incongruent outcome. Handheld devices in EMEA and APAC returned to growth this quarter, posting small gains over Q1 2015 reporting’s. With Microsoft still recovering from numerous slow-downs on last year’s Windows 10 mobile enterprise release, their continued success in the mobile space hinges heavily on their whether or not enterprise customers will truly buy into Windows 10 or whether they will end up migrating to an Android platform. In general, the second half of the year looks far more promising for handhelds across all regions.

Tablets saw mostly contraction in Q1, with Americas and APAC posting significant revenue losses when compared to Q1 2015. With that said, EMEA saw slight growth over the same period. The rugged tablet space faces increasing competition from consumer grade hardware vendors. These consumer grade vendors are able to offer devices at an impressively low cost, especially in bulk deployments, and are seen as a viable alternative for workflows which may not require a dedicated rugged device. Customer service roles in vertical industries such as hospitality, retail, and transportation are prime targets given the non-hazardous contexts in which devices would be deployed. One subsection of this market which continues to perform well is in the hybrid 2-in-1 tablet/notebook form factor. The opportunity for 2-1 hybrid devices can be leveraged in markets which rely heavily on textual input capabilities of a physical keyboard coupled with the efficient touchscreen navigation of a tablet. Look for Panasonic’s CF-20, released Q4 2015 as part of the Toughbook product line and the first rugged 2-1 device, to provide a good bell-weather over the course of 2016 and 2017.

The rugged notebook space, while hit hardest in Q4 of last year, not only saw a return to growth globally, but also saw YoY growth in all regions. Specifically, EMEA posted the highest increase in revenues of $15.7 million (36.9%) YoY; with the Americas and APAC posting a $9.1 million (7.3%) and a $2.6 million (10.5%) YoY revenue increase respectively. The rugged notebook market is starting to benefit from increased channel stability and should see these benefits continue to push revenues upward for the next few quarters.

For more information, be sure to review our full Q1 mobile hardware tracker and database, released at the end of June.