I attended BlackBerry’s Security Summit in NYC a few weeks back and wanted to finally share some quick takeaways from the event (a family vacation precluded me from posting this earlier—one of my 2016 resolutions was to disconnect while on vacation, and I actually succeeded!). The event was well attended, with many of the firms’ largest financial services and government customers in attendance. While none of these customers were willing to go on the record, several short conversations made it clear that these customers were loyal, and pleased with the firms’ roadmap and vision. 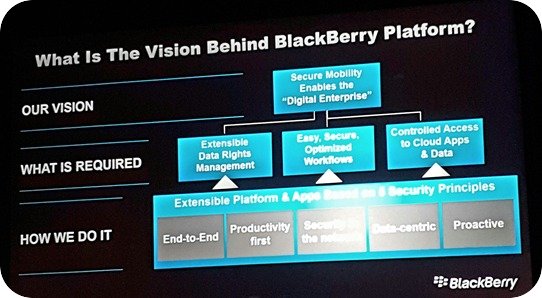 The above was a key slide used to articulate BlackBerry’s view of its role as “mobile solution provider”—quoting Chen. The de-emphasis of BlackBerry’s hardware business has been evident for some time; however, what is new, is the firms’ ability to cater to the expanding security requirements of its core customer constituency. This was evidenced by the multi-year, multi-million dollar contract BlackBerry revealed at the Security Summit to operate the U.S. Senate’s Joint Emergency Mass Notification System (JEMNS); the acquisition of crisis communication vendor AtHoc has proven to be very synergistic, and has provided several service expansion opportunities for the vendor. Given the current spate of police shootings and emergency lockdowns, BlackBerry will likely further capitalize on increased demand for secure notifications in both government and education markets (UCLA has been utilizing AtHoc’s Network-based Emergency Alerting System since 2008); BlackBerry also touted that its crisis communications contract with the U.S. Coast Guard was expanding to include alerting for staff members based in the U.S. Capital Region (AtHoc has counted the U.S. Coast Guard as a customer since 2011).

Key Acquisitions
While the AtHoc synergies are apparent, other acquisitions (specifically Secusmart, WatchDox, and most recently Encription LTD.) have also helped to round out BlackBerry’s security portfolio, and will allow the vendor to expand its threat mitigation and cybersecurity capabilities while providing service expansion opportunities. Our research also shows that acquiring Good Technology has quickly helped to shore up BlackBerry’s EMM market share (the company’s market share grew from 10.8% in 2014 to 21.4% in 2015). While there was significant overlap within these companies’ customer bases, there are real synergies. Good’s ability to fill the holes in BlackBerry’s cross-platform capabilities were sorely needed, and will give BlackBerry an opportunity to use EMM as an entry point to more expansive security solutions as well as managed services opportunities. While BlackBerry has done well to maintain its position in its core markets (financial services, health care, and government), it would have seen market share declines without acquiring Good because it lacked important cross-platform capabilities.

Handset Exit Seems Inevitable
When considering that BlackBerry’s software and services revenues have (finally) eclipsed hardware revenues, the firms exit from its beleaguered handset business seems inevitable. While there was some speculation that BlackBerry would announce a new device at the Security Summit (it didn’t); John Chen made it clear that the iconic handset manufacturer was intent on continuing to focus on transitioning to a software and services company. While this move has been expected, BlackBerry was wise to move slowly due to the dependence on its devices within its core customer base (specifically in federal markets). With device sales continuing dwindle (BlackBerry sold just 500,000 devices in its most recent quarter, down 17% from the previous quarter) the news that the company’s software and services revenue grew 131% YoY was what Chen (wisely) wanted to focus on.

BlackBerry just revealed that its new DTEK50 Smartphone was manufactured by Chinese OEM TCL—providing evidence that the firm is aware that the time has come to formally transition its hardware business and double down on its strategic shift to software and services. Chen has definitely righted the ship, as evidenced by the positive Q1 operating income (albeit small) that was recently revealed. While BlackBerry is well positioned to deliver comprehensive cross-platform mobility solutions, its professional service capabilities can be a key differentiator going forward, as the company’s cybersecurity consulting and implementation services capabilities have been significantly enhanced through key acquisitions (based on its cash position, BlackBerry is likely to make additional strategic acquisitions in our view—there is certainly no shortage of innovative/differentiated security-focused vendors to choose from).