As computer and mobile hardware approach commoditization, hardware vendors must find ways to remain profitable in the face of declining margins and sales. For some companies, this means a complete exit from hardware spaces, as with IBM and its x86 server or Thinkpad PC business. Most vendors, however, are reluctant to make such drastic moves while their hardware businesses continue to bring in considerable amounts of revenue, despite limited or declining growth. Desperate to evolve but reluctant to transform, many companies heed the advice of former HP executive Marten Mickos: “become a solution provider where hardware is an important part, but still just a part.” Whether the goal is diversification —expanding into different market areas with different products—or differentiation,—enhancing   hardware offerings with complimentary software to add value—all vendors are exploring new business models to stay ahead.

The list of possible strategies to combat commoditization is a long one, and each company’s unique needs will dictate their individual tactics. Most of the strategies, however, are being executed with the help of software acquisitions, as the hardware vendors often lack the talent, expertise, and time required to make these shifts. While the specific reasons behind individual acquisitions often provide more questions than answers, VDC, through a study of acquisitions over the last five years, has identified two complementary drivers of this trend in the mobility space. 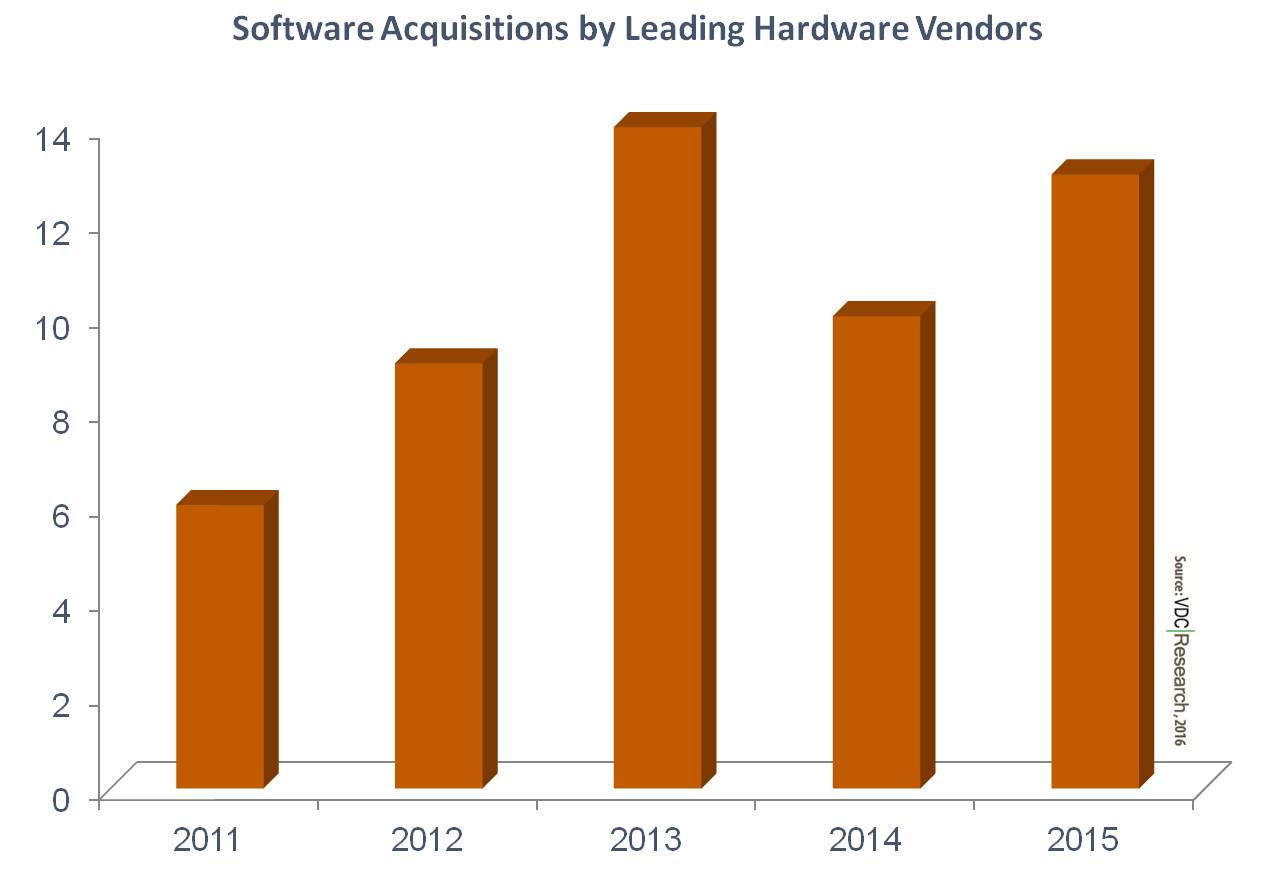 In the Pursuit of Differentiation
Honeywell, seeking to improve the value of its handheld device business, acquired the field service cloud platform provider, Movilizer, in 2015. Launching its first application in 2004, the company proceeded to grow at a rapid rate, building out the functionality of its platform and bringing on many large clients. Its field mobility applications enable devices, like Honeywell’s, to complete business processes by connecting workers to back-end systems via cloud technology. The acquisition serves as a new channel of revenue for the hardware manufacturer, but more importantly, will provide future cross-selling opportunities and differentiation to an otherwise rather homogeneous hardware portfolio. Too early to tell whether the acquisition will be successful or not, Movilizer does have future-proof potential given its cloud architecture and capabilities to build ever more applications to support evolving business processes.  Penetration into workflows through acquisitions represents one potential strategy that is not without risks—potential alienation of existing software partners—, but as hardware markets evolve, such actions may become more commonplace.

On the other hand, Apple uses acquisitions as a method to spur innovation and promote differentiation. When Apple wants to add certain features or technology to iOS, it often buys smaller software companies, integrating the software into Apple’s existing code, and shuttering the company’s existing offerings. This solves time-to-market issues and keeps Apple at the forefront of technological innovation. Its 2013 acquisition of the Twitter search and analytics company Topsy exemplifies this strategy – although expensive at $200 million, the acquisition allowed Apple to use Topsy’s searching system in iOS Spotlight Search and compete with Google. Apple targets very young software companies innovating in areas that could directly augment iOS, and usually shuts down the company’s offerings once acquired.

“Hardware as a Platform”
Of late, acquisitions have not ceased, with some hardware companies purchasing several software companies in any given year. A key driver behind these purchases is the concept of “hardware as a platform.” This idea encapsulates the thinking that although hardware is primarily just a shell for software, it also has features (sensors, camera, etc.) that provide an intrinsic value and allow the hardware to perform a specific set of functions. Moreover, when software engages with the powerful computing and sensory capabilities of the hardware, they can combine to replace traditional, purpose-built platforms. For example, the hardware capabilities of tablets—an increasingly commoditized business requiring either scale or unique positioning to remain commercially viable—have enabled them to replace platforms such as point-of-sale systems or stand-alone GPS devices. As off-the-shelf mobile hardware increasingly serves as a multi-faceted tool to support business processes and replace legacy computing terminals, hardware vendors will look to build out partner networks, develop service offerings, and acquire software solutions that allow them to meet the needs of their enterprise clientele.  Representing a promising new opportunity for hardware vendors, the obstacles to establishing differentiation and necessary industry expertise, nonetheless, loom large.

Enhancing the Hardware Proposition
Working in tandem with the “hardware as a platform” trend, VDC identified the increasing ability of software to manage hardware functionality and improve its value proposition, as another driver of software acquisitions. An example of this is Apple’s 2014 purchase of the one-man startup Snappy Labs. The founder re-wrote iOS’s JPEG compression algorithm to allow the iPhone cameras to take high-quality burst photos before the functionality was included in the native camera app. The SnappyCam app pushed the iPhone past the existing Samsung devices in terms of high-quality shots per second. Software such as this serves to further differentiate the hardware for which it was built and extend the hardware’s lifespan both of which are attractive prospects to hardware vendors considering an acquisition. In this way, software not only allows hardware to become more enmeshed in business process, but it also improves the functionality of devices, thus rendering a software play a growing necessity among OEMs.

In the enterprise market, Zebra Technologies made a similar play with its acquisition of ITR Mobility in 2015, which included ITR’s mobility platform, iFactr.  A strategic move, the platform virtualizes applications for Zebra’s entire rugged ecosystem, thus providing support to a customer base growing increasingly diverse in its operating system usage. With Microsoft ending support for legacy Windows, iFactr serves as a bridge for company’s looking to transition their applications to modern operating systems. This capability adds value to the Zebra portfolio of devices by extending the lifespan of hardware and provides support to end-users facing an unparalleled period of uncertainty.

No End in Sight
Regardless of individual factors influencing acquisitions, the hardware world is trending towards an overall greater need for software. In the field of enterprise mobility, the theme of hardware as a platform and the use of software to manage hardware functionality are gaining traction and will continue to grow. VDC believes that these factors will cause software acquisitions by hardware vendors to not only to continue but increase in the coming years.