More than $200M has been invested in notable vendors that are participating in mobile development platform and tools market in just the past ~12 months.

Significant venture capital investments continue to pour into the mobile development platform and tools space. More than $200M has been invested in notable vendors that are participating in this market in just the past 12 months (see below). VC's who are banking on successful exits have reason to optimistic in our view. 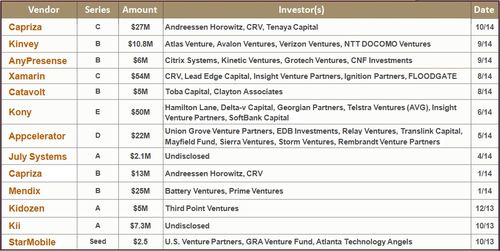 On the M&A front, there have been two notable (and recent) acquisitions. mBaaS vendor FeedHenry was acquired by Red Hat in September 2014 for $82M, and testing and UI framework specialist Telerik was acquired by Progress Software in October 2014 for $262.5M. These are large transactions when compared to prior acquisitions in this space, which were on the smaller end of the spectrum (RhoMobile by Motorola, Nitobi by Adobe, and Worklight by IBM).

VDC believes that M&A in the space will be on the rise in terms of the size and number of acquisitions; this is natural in a rapidly evolving space. Core engineering will play a big part in vetting the valuation of future transactions with open technology, scalability, security, and resilience leading the charge. VDC sees valuations rising, based not only on revenue and progress with customer acquisition but on innovation and the ability to tie into broader ecosystems and emerging markets.

There are several logical buckets for potential consolidators in this space. Large enterprise software/middleware (such as IBM, Microsoft, Oracle, and SAP); Cloud vendors in the PaaS space who are looking to augment their mobile capabilities (e.g., Amazon, Citrix, Salesforce, VMware etc.); application lifecycle vendors (such as Adobe, Opentext, and Progress Software); mobile solutions providers (such as Intel and Synchronous); and potentially IT professional service providers looking to integrate and assemble their own solution to service their customers. We also believe there will be consolidation among the distribution, discovery, and analytics players. In summary, we believe the mobile applications space has reached an inflection point and thus will gain increased interest on both the funding and M&A front.