Q3 Sees Strong Rugged Mobile Performance Across the Board

During Q3 2014 all rugged mobile form factors tracked – including notebooks, tablets, forklift mounted computers and handheld devices – posted year-over-year (YoY) growth, with notebooks and handheld devices leading the way. While the market dynamics for these solutions are increasingly encouraging, noticeable headwinds remain, limiting the growth potential over the next several quarters.

Rugged notebook shipments reached nearly $275 million in Q3, representing an increase of more than 10%, representing the second consecutive quarter of growth. The primary catalyst behind the recent swing in demand has been the retirement of aging systems running Windows XP. While that boost is likely to be short-lived, spending trends in target commercial and public sector segments remain positive. Nevertheless, price sensitivity will continue driving end users to opt for less rugged notebooks or alternative form factors such as tablets for their next-generation investments.

The rugged tablet market, the one consistent growth segment with quarterly growth upwards of 20% for the past two years, is showing signs of slowing. In Q3, tablets saw 12.7% year-on-year growth, which while strong, nevertheless represents a maturing of the market and the third consecutive quarter in which performance has eased from the previous quarter. Still, VDC anticipates that the rugged tablet market will top $500 million in 2014 and that the increased adoption of Android will present a growing opportunity as more enterprises move to adopt the OS for line-of-business applications.

The rugged handheld market, which represents the single-largest category at nearly $600 million, has begun to overcome the headwinds that had buffeted it throughout 2013 and into the first half of 2014. While the threat from lower-priced consumer smartphones remains, rugged vendors are modernizing their product portfolios with products more in line with customer expectations. Moreover, addressing the OS issue plaguing this category, adoption of rugged handheld devices running Android is reaching critical mass, including adoption by tier-I accounts in North America. The North American market had borne the brunt of the downturn but has rebounded in force, ending several consecutive quarters of contraction with year-on-year growth for Q3 topping 20%, supported by large-scale deployments in the retail and postal sectors. 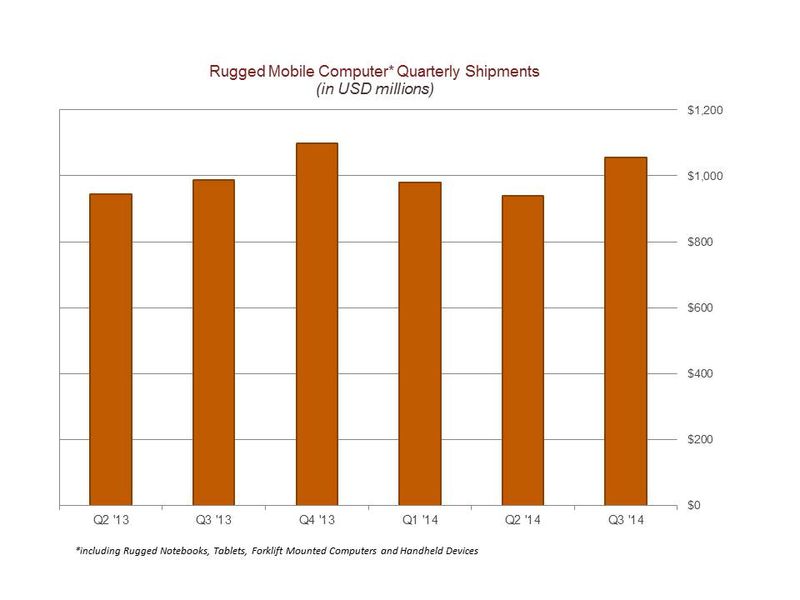