Now VMWare is thinking with Portals

... the opportunities to provision applications securely and on the fly is truly revolutionary and a possibility if VMware can integrate and evolve the technologies it has acquired.

Today marks the last day of VMWorld, VMware’s annual conference located in San Francisco. One of the key announcements came on Wednesday with the unveiling of the VMware Workspace Suite, which includes desktop virtualization, identity management, and app, device and data management. The package features many elements from its AirWatch acquisition, including Secure Content Locker and mobile management software. A central element to the package is the Workspace Portal, which enables mobile users to access Windows applications, cloud services and web apps from a single, centralized location. 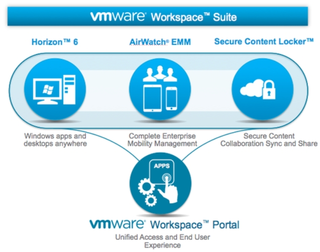 Imitation as a source of flattery…or confusion

Many people are noting the similarities between its new product suite and that of Citrix, which bears the exact same name. Citrix has taken note and took the opportunity to release a blog of its own – Imitation is never as good as the original – claiming that “It is often said that imitation is the sincerest form of flattery. And after reviewing VMware’s new announcement of Workspace Suite, all I can say is that all of us at Citrix are extremely flattered,”  before enumerating a point-by-point comparison of the two products.

However, despite creating a seeming workspace doppelganger, VMware is also likely to see increasing competition from Dell, which launched its own desktop virtualization solution, vWorkspace. Originally known as Quest Software, it was acquired by Dell in 2012 and offers additional features like support for Linux VMs and EOP protocol.

The Mobile Cloud Era: “Desktops Re-imagined and Inspired by Mobility”

VMware is weaving together technologies that have the potential to upend traditional end user computing deployment environments. The company’s recent acquisitions (AirWatch, Desktone, and CloudVolumes) are demonstrative of the mobile cloud era that VMware sees us entering. VDC agrees, and we believe that we are in the early days of a coming disruption in IT service delivery and the way organizations provision and manage devices for their workforce. While the adoption of virtualization technologies like those from VMware is limited, the opportunities to provision applications both securely and on the fly is truly revolutionary and a realistic possibility ifVMware can integrate and evolve the technologies it has acquired. We see the opportunity for cost savings and the flexibility that VMware has the potential to offer giving the firm a notable opportunity moving forward. VMware’s vision of delivery innovation as a service – from the data center to the desktop and mobile applications –are now a possibility; time will tell if end users are ready for it.