Will Good Technology's IPO Be Better than Good?

Tuesday saw the landmark announcement of an exclusive partnership between Apple and IBM in which IBM will bring its MobileFirst solutions to iOS and allow the former rival to sell iPhones and iPads with industry-specific solutions. With the impending release of the more enterprise-friendly iOS8 later this month, the announcement represents the culmination of Apple’s transition from consumer trendsetter to enterprise powerhouse.

A decisive break from the Jobs Era

The move firmly cements Tim Cook’s vision for Apple as a clear departure from the Jobs era, which saw much of the company’s history defined as a direct rivalry between the two firms, in which Jobs saw IBM as the Goliath to be defeated by his underdog David of a company. At its peak in the 1980s, the rivalry indeed took on near-biblical proportions in the form of full-page taunts to IBM in the Wall Street Journal and the now-legendary Super Bowl ad. Now, Apple has become the hardware giant and IBM has transitioned towards the cloud, big data and enterprise mobility, having moved away from the personal computing hardware in the last decade and making key acquisitions in analytics, security cloud computing infrastructure to position itself accordingly. 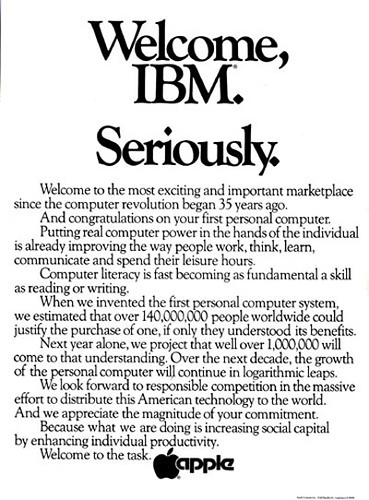 Apple’s shot across the bow to Android

The announcement comes on the heels of Google’s I/O conference, where it revealed not only the upcoming Android L, but a closer partnership with Samsung to integrate KNOX into the next version of Android. Dubbed Android for Work, the collaboration aims to place Google and Samsung at the forefront of enterprise mobility and overcome the shortcomings Android faces by the variety of handsets and versions of the OS on the market that all vie to compete against Apple’s iOS products. By teaming up with IBM, with its enterprise IT credibility, Apple has its presence in enterprise even more daunting. Although much of the company’s success in the past has hinged on its massive consumer popularity, but this was hindered by a lack of professional services, support and distribution channels geared towards enterprise. In addition to the engineering of native, industry-specific applications for iOS Apple seeks to overcome this with the combination of AppleCare for enterprise that is supplemented with on-site technical support and service that will hold considerable appeal for CIOs worldwide. By offering support service capabilities ranging from break/fix support and onboarding to asset and application management and security services, Apple has laid down the gauntlet and, at the very least, stolen much of Google’s recent enterprise thunder.

Crunch time for the competition

News of Apple and IBM’s new partnership will have a profound effect on other OEMs, particularly Samsung and Microsoft. For the former, this will likely mean forging and even closer relationship with Google, where the company has hesitated in the past. Despite their collaboration to integrate KNOX on Android, Samsung has shown a certain level of ambiguity in its relationship to Google, namely in the release of the Samsung Z in Russia and India featuring the manufacturer’s proprietary Tizen OS. At the heart of it, VDC sees two non-enterprise focused companies that have made decided enterprise overtures. While Google has made inroads to diminish Apple’s lead, this relationship could propel Apple back towards a considerable lead.

Meanwhile, Microsoft is in the midst of its own re-positioning as it is poised to announce the largest round of layoffs in the company’s history. Microsoft has struggled in bringing its devices into the era of mobility, and only made its Office suite available for the iPad in March of this year. Apple’s announcement could very well move the company further from hardware and increasingly into the cloud. As recently as last week, new CEO Satya Nadella published a company-wide memo outlining Microsoft’s intention to redefine what the company views as its core in a world that he defines as “mobile-first and cloud-first.” With Apple and IBM’s exclusive new partnership, Microsoft will have its work cut out for it in preparation for next week’s MGX and beyond.