Urban Air Mobility (UAM) – also known as Advanced Air Mobility (AAM) – has the potential to revolutionize life in urban centers for residents and enterprises. UAM has varying definitions across existing groups in the space, all of which refer to the airborne movement of goods and/or people in urban spaces, carried out by a highly automated VTOL drones; the Urban-Air-Mobility Initiative Cities Community (UIC2) of the European Union simply defines it as “very-low altitude airborne traffic, above populated areas, at scale.” The technology is years or even decades away from proof of concept or adoption; despite this, legislation and coalitions are being created around the world to smoothly enable the radical transformation when the time comes. In the United States, both chambers of Congress have passed bipartisan bills directing the Secretary of Transportation to establish a working group consisting of representatives from at least eight federal departments or agencies, including the Federal Aviation Administration and Department of Transportation. Minor differences between the two bills must be reconciled before a final version arrives on President Biden’s desk, where it will likely be signed into law.

In the days following the US Senate’s passing of its UAM bill, the World Economic Forum announced that it was launching the Advanced and Urban Aerial Mobility (AAM/UAM) Cities and Regions Coalition, consisting of founding members Amsterdam, Massachusetts, Orlando, Los Angeles, Île-de-France, and Sao Paulo. These cities and regions will work together to accelerate the adoption of air mobility services within their own domains, building on work that has been done in Europe under the UIC2, which will join the European arm of the WEF coalition as a founding member.

The WEF is eying urban air mobility as a prospective solution to the increasingly complex challenge of moving people and goods throughout urban centers – which are expected to grow rapidly in the coming years – by expanding transit channels into the airspace. Air mobility shows great promise in efficiently and sustainably enhancing transportation options. Furthermore, the innovative technology requires significantly less infrastructure than current alternatives, such as trucks and trains. Due to this, UAM promises to greatly reduce infrastructure costs and nearly eliminate challenges caused by “wear and tear,” as well as other issues which plague traditional infrastructure, like extreme weather events and, in colder regions, freeze-thaw action.

There are several key challenges facing UAM adoption, as with any transformational innovation. The WEF coalition, along with others, hope that by focusing on these challenges today they can alleviate potential issues before they ever have a chance to hamper the innovation. While UAM requires significantly less infrastructure than traditional transportation methods, it still does require dedicated infrastructure in the form of landing pads or zones. Before mass adoption and use of these sites, it is imperative that UAM coalitions advance rapid advancements in air-traffic control. UAM’s successful adoption would entail a massive increase in the amount of air traffic coupled with a significant decrease in space between aircraft. This, combined with the fact that UAM will exist above populated areas greatly reduces the tolerance for potential errors in air traffic control. Additional concerns including noise pollution, congestion, and inclusivity must also be addressed by cities and regions hoping to take advantage of UAM in their jurisdictions.

The matter of when and if UAM will transform life in the world’s urban centers remain contentious questions. It could be decades before we see autonomous drones carrying people throughout our cities; however, according to retail executives surveyed by VDC Research we can expect autonomous drones carrying goods overhead in just a few short years. (Exhibit 1). Of course, it could be quite some time before the technology and auxiliary support like air traffic control are developed and scaled to support the full vision for UAM, but the WEF and innovative governing bodies around the world working to get out in front of associated challenges is a promising indication for UAMs future success. 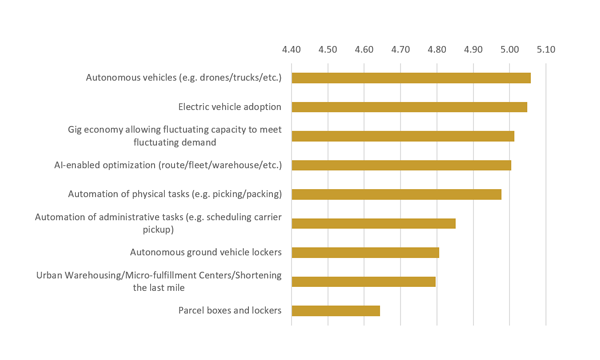